I'm not looking to get followed by loads of people I barely know, so if you make a follow request it's highly likely I'll reject it. Oh well.

To really spell it out, because there are people on here who think they are discriminated against for being German: I am saying this place applies oral suction to the anus, because it is hostile to people of color. This hostility manifests in myriad ways, including portraying men of color as uniquely aggressive, dangerous, and hypermasculine, and grilling anyone who has a racial/ethnic background other than WASP on their knowledge of their own culture and their blood quantum.

It's a good thing all the antiracist white leftists on here are inoculated from the rampant anti-latinx propaganda that has been going around the US for the past half decade or so. You know about latinx people being overly aggressive and very dangerous people that need to be kept out.

I used to think only right wing assholes who rant about urban elites believe these kind of things, but here we are, with unexamined prejudices and racist baggage from before we got woke.

Hi, I was pizza_party@snouts and when I was feeling like shit I decided to request an account here.

I honestly don't know how much time I'll be spending on the fedi in the next few days, but I'm grateful I got approved and that I have somewhere else to hang out if I want to. 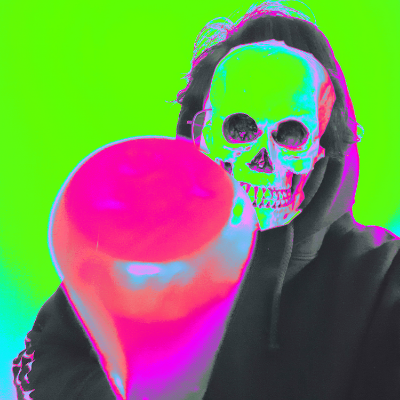 I tried to listen to the Los Lobos album that got them the number 3 slot on a Village Voice Pazz & Jop poll in 1983/4 but man. I wasn't feeling the rockabilly, then the third song sounds like a damn polka.

This is probably the name of an actual person, who sells crystals and bone jewelry on Etsy

there’s a big joel video that came out recently where dissects a very specific moment in a ‘debate’ blaire white had with other conservatives, where they basically just steam roll her and she’s like, shocked about it. but it’s like, blaire what the fuck did you expect??? there is no universe in which you can make yourself “passable” and “acceptable” enough to conservatives in which they actually accept you instead of utilizing you as a prop whenever they feel they need to make a point.

Cat update: She begged to be let out of my office to greet my other partner when they came home with groceries.

practically everyone knows at this point that you don't need a CS degree to be a working programmer any more than you need an architecture degree to be a working carpenter. so why is it still used for gatekeeping (of both jobs and internships)? to immediately exclude a huge number of workers from candidate pools, which makes the bargaining power of the remaining candidates lower, to preserve and justify the two-tier employee/contractor structure where employees are treated well and contractors terribly that has become ubiquitous within the industry, and to preserve the status quo where those salaried positions are primarily filled by the most privileged classes of people.

can we hear the feral impala instead

@zorotl art and the computer field have this same issue where everyone's like "dont take low paying jobs! dont undersell your commissions/freelance! dont go to school if you can teach yourself and if you do use it to network! dont take these risks that i took, someone who is 5+ years into the field at this point". then with no concrete advice on how to enter the field without doing those things because really? there isnt, unless you're lucky or connected.

the prevalence of horrendously exploitative programming bootcamps is a symptom of a field that doesn't have strong unions to train people to program. if we had strong unions that trained people it would take the profit motive out of education which would benefit literally everyone involved except the people who run bootcamps and the people who hire programmers.

Playing SG2 is reminding me of why I barely touch Steam. The game itself is fun, but the platform is so annoying and clunky when you don't have a dedicated gaming laptop and want to hop in and out of playing during the day.

I'm not looking to get followed by loads of people I barely know, so if you make a follow request it's highly likely I'll reject it. Oh well.

egirllenin There is nothing here!

shortking There is nothing here!